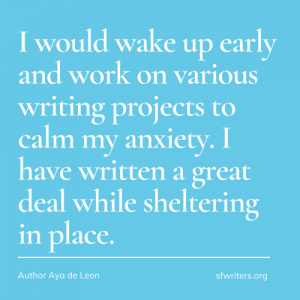 When the shelter-in-place order hit Northern California, I was working on several different books. Two are with a commercial publisher and due out in December 2020 and fall 2021. Another was just about ready for my agent to shop. The other projects range from idea to outline to partial drafts to revised versions.

People say I’m really productive. But the truth is that when I’m nervous, I write. It helps me to cope with anxiety. Writing fiction, I have a lot more control than in real life. Although I’ve been writing a book a year in my Justice Hustlers series for Kensington Books, I have been producing content much faster than my agent can sell it. In response to the climate emergency, I also co-founded a climate blog with a few other writers and have been contributing weekly (the Daily Dose: Feminist Voices for the Green New Deal) and I’ve been writing other short essays.

I have also had the idea for a children’s chapter book for years, particularly since my kid has been of chapter book reading age. I have read them aloud and previewed them to see if they would be a good fit. You know how writers are. If we find ourselves reading a bunch of books in a new genre, we often think, “Hey, I could write a book like this!”

From the business side, however, the price point for chapter books means that they are not very lucrative. Instead of paying writers to develop new concepts, many publishers source their chapter books with protagonists from TV shows, movies, comic books, or other pre-existing character franchises. They are more about licensing than actual development. As someone who has yet to break into the children’s fiction market with a YA, MG, or picture book, I am not well positioned to break in with a chapter book. Besides, I have sent chapter book manuscripts to my agent and she has been lukewarm. She handles mostly adult books and complains that the characters in my chapter books aren’t very developed. But that’s part of the genre. They’re short, don’t use very long words, and are just not that deep.

I love my chapter book concept, though. And I felt some sense of urgency. I wanted to publish it while my kid was still in elementary school—young enough to be part of the experience. I had some tough choices to make. I could put in a ton of work to make the chapter book commercially viable, and I still might not sell it. And if I did, it wouldn’t make much money. I decided to save that energy for my other projects. Even though I had a longer-term route to being commercially published, I decided to take the path of least resistance and to self-publish.

In 2013, before I had an agent or a book deal, I had an idea for a children’s book, puffy: people whose hair defies gravity. At the time, I published it in part because I was so frustrated in my search for an agent for my adult novel. Prior to becoming a novelist, I was a spoken word poet. I published my own chapbooks and had a DIY approach to the means of production. Again, I wanted that sense of autonomy and control. I published puffy to little fanfare. I also used the Amazon platform. At the time, it was called CreateSpace, but now it’s KDP, Kindle Direct Publishing. I used Amazon because I had a toddler at home and the other self-pub platforms weren’t as easy to access as they are now. I was able to discuss my project with a live and knowledgeable person on the phone for over an hour before I had even spent a penny. Back then, I chose ease. But now, I am concerned with the role that Amazon is playing in our economy overall, and with books in particular. I decided I wanted to self-pub with a company whose business model was more supportive of independent bookstores.

I have been fortunate, however, to have support for puffy from an unexpected population: librarians loved my book and started carrying it, despite the Amazon origin. I even got a favorable review in School Library Journal. Independent bookstores generally will not carry Amazon books (fair enough). There’s no reason I couldn’t have it on both platforms, but I haven’t taken the time, because that’s not my biggest priority now. I want to get the new book out on a different self-pub platform.

When I went to the SFWC this year, I was excited to talk in person with folks from Ingram and Lulu. It turned out that I knew one of the Lulu representatives, who had worked with my commercial publisher in the past. I liked both of their presentations. I ended up going with Ingram because my friend who was helping me with the project had experience on that platform. Again, the path of least resistance.

And then I found myself locked down, sheltering in place. As a parent who suddenly has no childcare, it has been hard to get anything accomplished. Also, I teach at UC Berkeley, and have continued with my full load of classes on zoom. Yet I would wake up early and work on various writing projects to calm my anxiety. I have written a great deal while sheltering in place.

But you know what does not calm my anxiety? Dealing with the technology and financial part of self-publishing. This is the part that I procrastinate. However, I had been saying the book would be out in May. When May 1st hit, I kicked everything into high gear.

So now all the technical and financial business is handled, and I’ve officially published!!

Here are a few things I learned about self-publishing.

At any rate, I am delighted that my DIY spirit has stayed strong, and I look forward to making some waves among the 8-11-year old crowd with this new book

Equality Girls & The Purple Reflecto-Ray is out now!

Fourth grader Daniela Santiago gets knocked out in a freak accident involving her dog, a laser and a wad of grape gum. She wakes up with a strange superpower! Now, when she sees girls being excluded or put down, she gets so mad that things get out of hand. Purple laser rays shoot from her eyes and mean boys get a taste of their own medicine. Can Daniela and her friends find a way to use her power for good? When the president comes to judge a tween beauty contest, they might just get their chance!

“Thank you Aya! Equality Girls… is the funny, empowering, engaging, and radical book we all need right now. May we all find the social justice superpowers we hold within ourselves!”

“In a time when women and girls still struggle for equal rights, here comes Equality Girls and the Purple Reflecto-Ray! De Leon delivers a fun, sci-fi adventure for young readers that follows four budding feminists…as they burn through the patriarchy with laser beam precision and turn it on its head. Fists up, girls everywhere! A new order of justice has arrived, and it smells like grape-flavored bubble gum!”

-Aida Salazar, Author of the International Latino Book Award-Winning The Moon Within 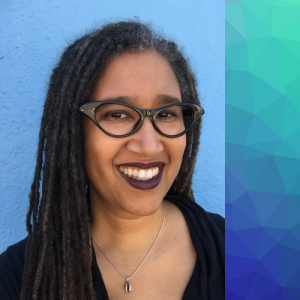 Aya de León teaches creative writing at UC Berkeley. Kensington Books publishes her award-winning feminist heist series, including SIDE CHICK NATION (2019), the first novel published about Hurricane Maria. She has received acclaim in the Washington Post, Village Voice, and SF Chronicle. She published PUFFY: PEOPLE WHOSE HAIR DEFIES GRAVITY (2013) and EQUALITY GIRLS AND THE PURPLE REFLECTO-RAY (2020), about a girl who uses her superpowers to confront the president’s sexism. In December 2020 Kensington will publish A SPY IN THE STRUGGLE, about FBI infiltration of an African American eco-racial justice organization. She has been presenting at SFWC since 2015.