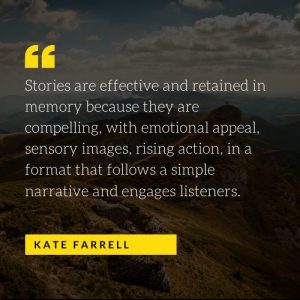 “You’re never going to kill storytelling because it’s built-in the human plan. We come with it.”

Today, storytelling is a hip trend in marketing campaigns because stories are the most successful way to engage and retain customers. In the last twenty years, TED talks have promoted the personal story as an effective speaking tool, while The Moth storytelling programs have grown internationally to great acclaim, and spawned local Story Slams for eager adult audiences.

But the oral tradition is ancient: It created, by word of mouth, a body of literature, history, and science that survived millennia. Storytellers were the first nonfiction authors; they made sense of the world and natural phenomena for their people. Prehistoric experiences could be bewildering, even terrifying. Folktales, legends, and myths shaped the onslaught of sensory input, fears, and confusion, and created a narrative arc that structured and informed.

Stories are effective and retained in memory because they are compelling, with emotional appeal, sensory images, rising action, in a format that follows a simple narrative and engages listeners. We can immediately identify with the action because stories imitate our experience of life in real time, yet within a framework that finds resolution. We are hard-wired to wonder what happens next and how it all ends.

The age-old pourquoi tales that tell “why” things are the way they are, made meaning of the natural world in a story form that mimicked the real-life experience of the village or tribe. If you ever wondered why the sun and moon live in the sky, why mosquitos buzz in your ears, or why spiders live in dark corners, the world-wide storytelling tradition has a tale for that.

Most famous are the truths passed down in the ubiquitous Aesop’s Fables that demonstrate the clear consequences of human behavior. We all know his fables of “The Hare and the Tortoise,” “The Boy who Cried Wolf,” and “The Country Mouse and the City Mouse.” Less well known is that Aesop was the Black slave of a man named Ladmon, and lived in the south of Greece near northern Africa, and was named for his place of origin. Most accounts describe Aesop as a deformed man whose name came from the Greek word Aethiops which means Ethiopia. According to Herodotus, Aesop was eventually freed by his master due to Aesop’s captivating talent as a storyteller. Aesop’s fables are allegorical tales with animals representing humans to teach a moral.

Though Western culture has often appropriated Aesop’s Fables as part of “classical” literature, it is a tribute to the storyteller who gained his freedom by sharing the brilliant African tradition of the animal fable, that the stories themselves lived on for centuries. They spoke a universal truth.

Now, in the twenty-first century, our world has shrunk and become a global village through the magic of the internet and telecommunication. The narratives that worked within a local region, in a specific religion, or ethnic heritage might not make sense to other groups. In fact, we are in a storytelling dilemma of conflicting narratives. Imagine a cross-section of your neighborhood, your apartment building, town or city, and listen to the narratives that contradict one another. These are told in the news, on placards, protest signs, social media posts, and digital platforms of all types.

In the face of a continuing global pandemic, and the social justice movement confronting racism, we are being challenged to tell new, inclusive stories. How can we resolve the issues that affect us all without doing so?

As writers, we can begin to create new narratives by becoming storytellers to our own lives, through:

As you journal during these challenging times, think of these prompts:

In writing a personal narrative for a blog or for telling, consider your role today as a witness bearer to current events, the key issues we are facing:

1. Look at a timeline of your life; when did you experience non-discrimination? Through reflection, what did you learn from that incident? Be sure to use all the elements of a good story: No matter how short, write a complete narrative, with specific sensory details, setting, vivid language, characters, dialogue, and a clear story structure with a beginning, middle, and end.

In September 1947, I was sent to St. Joan of Arc School for first grade—a mission school on the Texas-Mexican border taught by nuns recruited from Ireland. I was eager to start school since I was almost six, but St. Joan of Arc was a scary place; the classrooms looked like large, metal ovens. They were a series of low-lying Quonset huts set on packed dirt, semi-circular, arched buildings made of corrugated steel, with a small door on either side, and screened windows held open with a stick. The inside walls curved down at the edges in a non-insulated, cavernous room. Post-World War II, these lightweight structures were US Navy surplus and sometimes sold to the public. Good enough for a Catholic missionary school, they offered little shelter from the scorching South Texas sun. I wasn’t sure I wanted to go into a strange, dark classroom.

The first-grade teacher, draped in a black veil, her face wedged in a white, starched headdress, quietly demanded our attention. The nun rapped her rubber-tipped, wooden pointer to a full-color image on an easel board’s oil cloth page. In her lilting Irish brogue, she held forth, telling of the Holy Family and their simple life when Jesus was a boy. I was fascinated by the thick pages as she turned each one, heavy as a tablecloth, to the next Bible scene. Each illustration was more beautiful than the last, with radiant people and bright halos, creamy white skin, rosy cheeks, and golden-brown hair. Around me were scores of other students, all but one Spanish-speaking, stiff and obedient, packed wall-to-wall in our tiny desks. We would stand for hours in the stifling heat to repeat common prayers line by line, and sing hymns in English.

We were wary of one another, crammed together, disciplined, unable to really communicate. One day at recess, while I was alone at the chain-link fence, a boy with laughing eyes came skipping up to me. Coming even closer, he stole a kiss on my cheek. I gasped and smiled, felt my cheek, as he ran away to his friends. I was charmed: such bright, flashing eyes, so full of mischief and bold appreciation. He liked me, even if he’d been dared to steal a kiss. Across the yard, he saw me smile back.

In this missionary school, there was a larger context, spiritual, inclusive, non-materialistic, that saw all students as more similar than different. The dedication of the nuns who sacrificed many comforts to teach in a crowded Quonset hut classroom had the distinct purpose of preparing us all for a life of spiritual gain. I don’t remember indoctrination, more a sense of caring, anchored in an established, cultural, religious tradition. If the sisters knew that I was one of two Anglo girls in the class, I’m not sure they remembered it. Though a minority in the school, I was no more, no less than my fellow students in overall status. Under the leveling eyes of the Irish nuns, we were all expected to live up to high standards of good behavior and learn our lessons. Looking back, it was the spiritual dimension of Catholic teaching while in a Catholic charity school that embraced us all.

2. Look at a timeline of your life: when did you experience or bear witness to discrimination? Through reflection, what did you learn from that incident? Be sure to use all the elements of a good story: No matter how short, write a complete narrative, with specific sensory details, setting, vivid language, characters, dialogue, and a clear story structure with a beginning, middle, and end.

3. Tell a story of reconciliation in real terms, one that transcends bias and discrimination. It could be a retelling of what did happen in the past or a newly imagined story line: No matter how short, write a complete narrative, with specific sensory details, setting, vivid language, characters, dialogue, and a clear story structure with a beginning, middle, and end.

Storytelling within a nonfiction essay that addresses the current topics of pandemic or the need for systemic change to combat racism, is the most effective way to reach and convince your readers of the truth. There are three basic ways to use stories in nonfiction writing:

Conclusion and a Challenge

Aesop knew that basic human nature was universal, even while using the allegories of animals, insects, and the elements—fables from the African oral tradition. What stories can we tell now, to ourselves and others, that reveal who we are?

The North Wind and the Sun had a quarrel about which of them was the stronger. While they were disputing with much heat and bluster, a Traveler passed along the road wrapped in a cloak.

“Let us agree,” said the Sun, “that he is the stronger who can strip that Traveler of his cloak.”

“Very well,” growled the North Wind, and at once sent a cold, howling blast against the Traveler.

With the first gust of wind the ends of the cloak whipped about the Traveler’s body. But he immediately wrapped it closely around him, and the harder the Wind blew, the tighter he held it to him. The North Wind tore angrily at the cloak, but all his efforts were in vain.

Then the Sun began to shine. At first his beams were gentle, and in the pleasant warmth after the bitter cold of the North Wind, the Traveler unfastened his cloak and let it hang loosely from his shoulders. The Sun’s rays grew warmer and warmer. The man took off his cap and mopped his brow. At last he became so heated that he pulled off his cloak, and, to escape the blazing sunshine, threw himself down in the welcome shade of a tree by the roadside.

Gentleness and kind persuasion win where force and bluster fail.