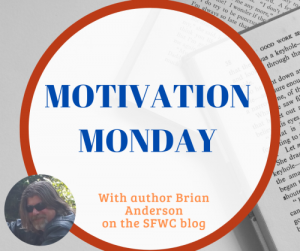 There are things I’ve learned from television over the years. Watching the Weather Channel, I learned that God hates trailer parks. From the History Channel, if we don’t know who built it…aliens. From the Science Channel, it’s only a matter of time before a comet will kill us all. And from cable news that fear drives ratings even more than sex.

I know there are a lot of frightened people during this recent health crisis. And much of the fear is justified. Still, the constant drumbeat of doom and pestilence blaring from every screen isn’t calming frayed nerves. Nor is the isolation people are suffering to keep everyone safe. As authors, we may find ourselves unable to create when faced with such crushing tension and uncertainty. Many may be feeling helpless or confused. What should we be doing? Is there anything we can do?  The world still turns, after all. Our readers are out there. But it can feel wrong, under the circumstances, to reach out with something so trivial as your latest book or whatever you typically share with your audience.  However, this may be the best time to do precisely that….and more.

Why Your Book Matters Now

While you might not be able to alleviate suffering in the physical sense, there is a mental health component to every crisis. When normality is lost, and the foundation we’ve built as a society is shaken, it can often be the small things that keep our minds from flying apart. Your interaction with fans may provide a few moments of calm in their lives – a smile and a laugh when they are needed most. After all, that’s what we do, isn’t it – provide a respite for people who need a way to escape the challenges, turmoil, and toil of day to day life? It seems to me that as those challenges increase, so does our responsibility to provide comfort.

As some might know, I just released The Bard’s Blade through Tor Books, Jan. 28th. This was my first foray into traditional publishing and I had made arrangements to tour the country with an organization called The Bard’s Tower in support of the release. Seventeen cities! The thought of visiting unfamiliar places and talking to fans from around the country –  not to mention the celebrities I would meet at the various Cons – had me ready to burst with excitement. But that’s not going to happen. The shows are cancelled. And I’m stuck at home like everyone else.

Initially, I wallowed in self-pity, then plopped down at my desk staring at the screen, unable to type a single word. All my plans, blown to bits by a microscopic organism. You see, it wasn’t just the Cons I was missing. I had made arrangements to sign copies at bookstores in each city I was to visit. Basically, a full court press to guarantee sales and secure all the leverage I could for my agent when the time came to negotiate the next series with Tor.  I wanted to cry, scream, and get very drunk. And I must confess to doing all three.

Eventually, I sobered up enough to check my emails, and it was then I realized self-centeredness and defeatism was not helping anyone. I like to think of myself as a giving person, and I derive pleasure from helping people. So, after I read the email from Laurie, my agent, I knew what I had to do. Laurie’s not only a great agent, but she’s an intuitive and forward-thinking person. She knows me well and knew how I’d be feeling. So she offered up suggestions for alternative plans, some of which I will be sharing with you. Not only can they help to alleviate a portion of the pain people are enduring, but it can help to keep your mind focused on something positive.

Alternatives to a Traditional Book Tour

1. If you don’t have one, start a YouTube channel. This might be a problem for the introverts among you. But if you can overcome it, posting videos is a great way to connect with readers. While you can offer writing tips, or give book reviews, there’s really nothing off limits. Well…almost nothing. Just be yourself. Talk about whatever is on your mind. Read chapters from your book, talk about how the virus has impacted your life, if you want, interview authors you know. Hold topical discussions on subjects you care about. The important thing is to be genuine.

2. Have a sale on all your indie titles. This only applies to those of you with indie titles of course. Unlike traditional titles you may have, the pricing is under your control. Though depending on the publisher, you might consider approaching them with the idea. It couldn’t hurt to ask.

3. Run an online contest or raffle. Put together a group of your titles along with some odds and ends (book marks, coffee mugs, or whatever you want) as a prize bundle. While this promotes awareness more than actual sales it’s an inexpensive way to draw readers to your work.

4. AMA (Ask me anything). Whether it’s on Reddit, or one of your social media sites, offer the fans a chance to ask you questions. I would encourage you to allow them to get as personal as you feel comfortable answering. While many questions will be about your work, fans are often curious about a writer’s life.

5. Hold a fan-fic contest. This directly promotes your own work. But you can extend it to any sort of writing contest. As a professional, your critique is a valuable prize.

6. Silly picture contest. In troubled times, keeping it light can be a great salve for the soul. Have your fans send silly pictures of themselves, their pets, their spouse, or whoever, holding a copy of your book. The goofier the better.

These are only a few examples of what you can do. In this situation, it’s about connecting with the reader. So if you can come up with something else, now is the perfect time to give it a try. Your fans will love you for it. They’ll see that you are trying to reach out and provide some needed comfort and distraction during a scary point in their life. And it goes without saying that while you might be promoting your own work, you’re also doing a good deed. You’re being of service. And for my part, that’s all I’ve ever wanted out of my career. Well, that and $100,000,000. Still working on the second thing though.

Brian D. Anderson is the indie-bestselling fantasy author of The Godling Chronicles, Dragonvein, and Akiri (with co-author Steven Savile) series and the newest Bard’s Blade fantasy series from Tor Books. His books have sold more than 500,000 copies worldwide and his audiobooks are perennially popular. After a fifteen year long career in music, he rediscovered his boyhood love of writing. It was soon apparent that this was what he should have been pursuing all along. Currently, he lives in the sleepy southern town of Fairhope, Alabama with his wife and son, who inspire him daily.