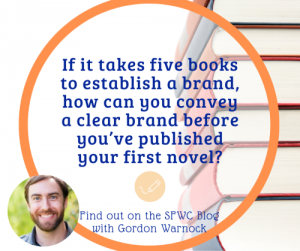 If it takes five books to establish a brand, how can you convey a clear author brand before you’ve published your first novel? Find out from agent Gordon Warnock! And take a peek inside the brand of million-copy-selling women’s suspense author Kerry Lonsdale…both past speakers at SFWC!

Brand (n): (1) your identity in the business, (2) your own unique take on an established genre, (3) how you write to and interact with a certain audience as only you can. With consistent, high performance, your name will eventually become synonymous with your brand.

Though I will on rare occasion sign a one-book author, my favorite part of being an agent is managing authors over the long term, building careers by strengthening brands. As with any aspect of the author/agent relationship, this works best when the author is passionately working toward the same goal, something I look for right away when I receive a submission.

If I’m in a conference pitch session, and the author isn’t conveying a clear brand, I’ll often ask them to consider an unlikely but useful scenario: if they get a five-book deal today, in which genre would they want it to be? I then have them describe the themes and characteristics shared by all of the books in their long-term literary investment.

Every author is different, but in the overwhelming majority of cases, readers won’t have a firm grasp on what you write after your first book. Or at least, after one or two books, they won’t yet be confident that everything you write will provide a certain kind of experience. You’ll need to consistently deliver, satisfying a certain kind of reader with a certain kind of story until they trust that your next book will similarly deliver. These days, that often starts happening after you’ve published about five successful books in a row. Once you’ve built that trust, the reader shifts from wanting to buy a certain type of novel that you just happened to write, to wanting to buy your new novel.

When you’re just starting out, this may seem like a chicken-and-egg dilemma. If it takes five books to establish a brand, how can you convey a clear brand before you’ve published your first novel?

Lamented by some writers and welcomed by others is the fact that the job of an author today is not just to write. You’ll need a website and a social media presence as a way of connecting with fans. Sometimes, your publishing contract will even require it. And the same way that you know by your uncle Jeff’s Twitter feed that he’s a left-wing/right-wing/chicken-wing political extremist, your future reader (or agent) could know that you’re passionate about space-opera sci-fi or romantic YA contemporary from a certain marginalized culture, for example.

That’s how we knew what to expect from a then-unpublished writer named Kerry Lonsdale. Know this: if an agent likes your submission, they will Google you before offering representation. It’s in our best interest to know what we’re getting into. In Kerry’s case, she had secured her name as a website URL and social media profiles, which automatically gives the impression that she means business. But the clincher there wasn’t just that she was present; she was working to clearly define herself by establishing a specific presence. In her case, there was a lot of seaside imagery, and terms like “beach reads,” “page-turning,” and “suspenseful” appeared often. Her bio listed that she was a co-founder of the Women’s Fiction Writers Association and had placed several times in Romance Writers of America unpublished manuscript contests. The writers she was connecting with online often fell under the genre of women’s suspense fiction. Altogether, it was a nice Venn diagram that defined her place in the market before she even had an agent, let alone a book deal.

She had a couple of manuscripts in the works, and given her online presence, they were exactly what you’d expect. They both took place near the ocean, dealt with family drama and fraught romantic relationships, offered a looming quality of page-turning suspense, and were led by complex, active women. The actual storylines were, of course, unique, but both manuscripts offered similar experiences to a similar kind of reader. Perfect. She talked the talk and walked the walk.

Kerry’s debut novel, EVERYTHING WE KEEP, went on to move over a million units in the first year and spawn a WSJ-bestselling trilogy. This week will see the release of LAST SUMMER, her fifth book of women’s suspense fiction, a bit darker and more ambitious than the previous four, but still well fit for the brand she had on day one. And though I can’t talk about it yet, her book coming out in 2020 will branch out even more while still remaining friendly to her brand.

The goal here is nothing new. After dozens of novels published and numerous bestsellers, horror fans don’t typically describe Stephen King’s next novel as much as they just say, “I want to read the new Stephen King.” With the proper branding, we want fans of page-turning women’s suspense saying, “I want to read the new Kerry Lonsdale,” and these days, we’re starting to hear that a lot.